Having stared at this for the last 40 minutes or so, I can’t shake the feeling that this piece needs a little explaining, so I’ll take you through the process step by step.

The original of this was another piece from the now-defunct Athena high street card chain, which specialised in making 80s “art” posters, which look seriously dated now. As I leaf through my postcard stash, every time I come across an Athena card, I smile, because it looks so of it’s time and I just can’t imagine them selling in this era of digital photography.

So I started with this piece, a “moody” black and white shot of a chair with a picture of a field in the background. Strong shadows come from a light source to the right of the picture. As I said, I can’t imagine anyone buying this these days, but maybe it’s just me. 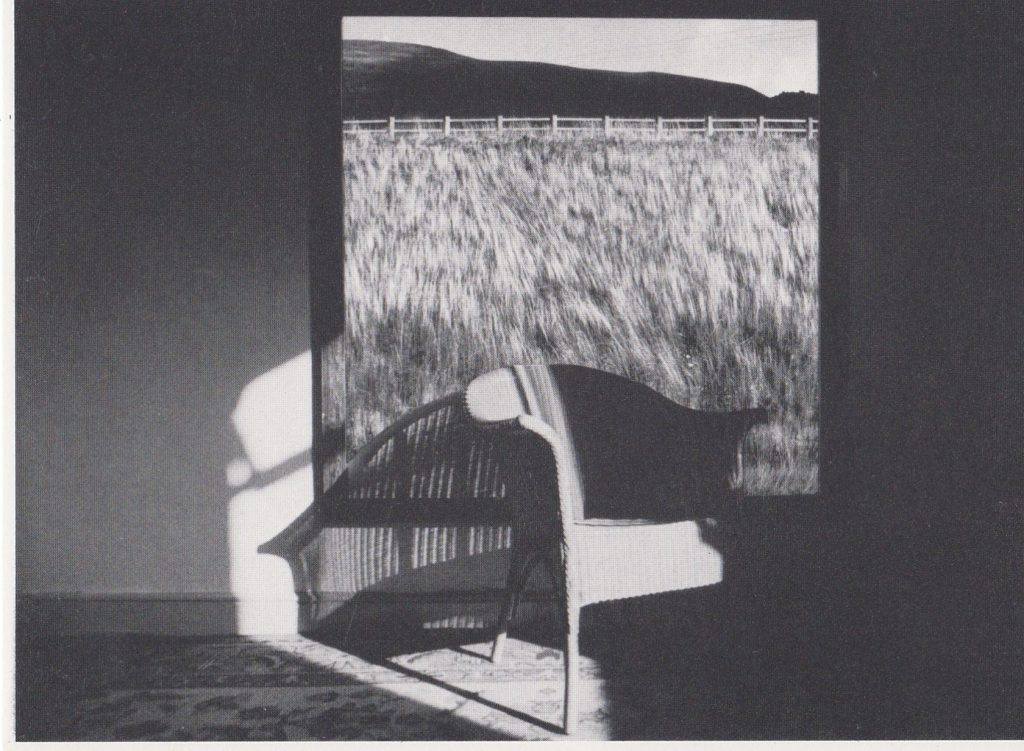 Seemed like a pretty simple job I thought. Bold lines, almost chiaroscuro shading, this should take an hour and I’ll be in bed. No problem.

Just, that I then had the bright idea to do this using collage instead.

A half hour of rummaging through magazines and I got lucky and happened to find a chair of about the right size facing in the right direction and by slicing just right I also found a scene that contained a lot of grass and a mountain in the background at almost exactly the same height.

It was obviously meant to be 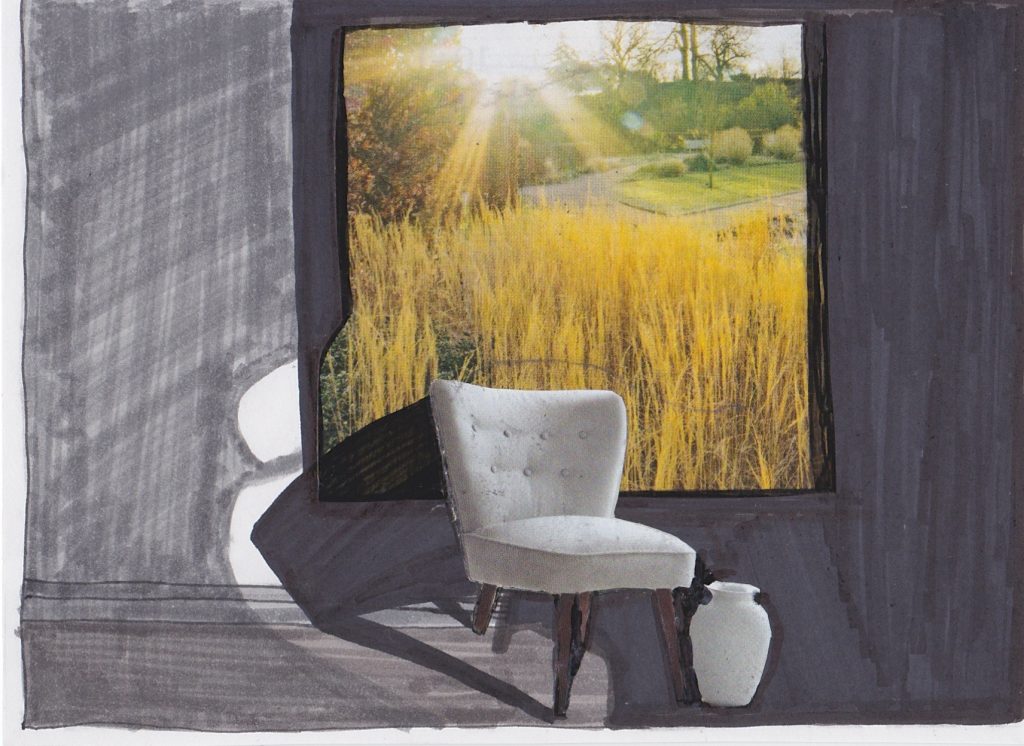 Then came the hard part.

The chairs were not exactly the same size and shape, so a direct cut would have looked really weird. Up until now, I’ve tried to include roughly equal amounts of each card on each half too.

What I had to decide was, what were the important points of this card, as it became clear that the important thing was to keep the essence.

Clearly the picture and the chair were most important, and the chair had to be in one piece. How  I would manage this was really bothering me for another 45 minutes.

Already 2 hours over the estimated time, our little girl woke up, so Elena and I ran in to do our parenting thing, which basically entails sitting in a dark room and cooing.

About 30 minutes of cooing later, it occured to me that I could cut out the chairs by cutting the leftmost chair out, then ensuring the contour of the chair on the right was followed. I left Elena in the dark and rushed back to the drawing board. 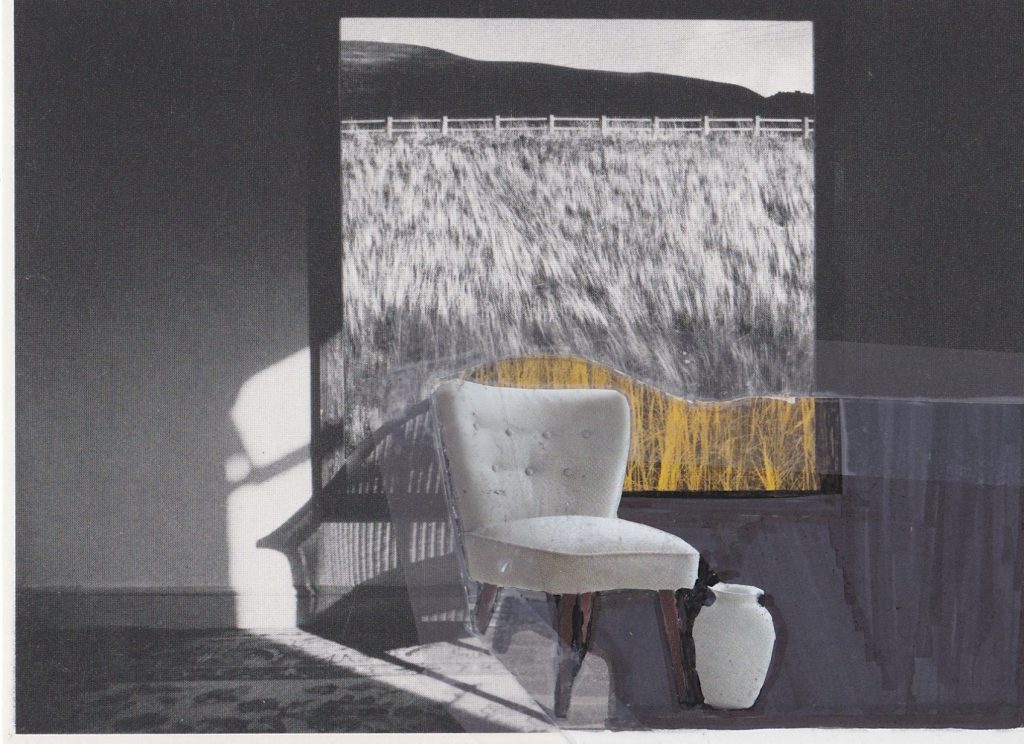 The cut was my most precise yet and only cut one quarter of the card. This is the smallest fraction I’ve done yet, but managed to give equal importance to the 2 main elements of the image. What I was amazed by was how the grass seemed to merge from the two unrelated images and the shadows fit on the legs. 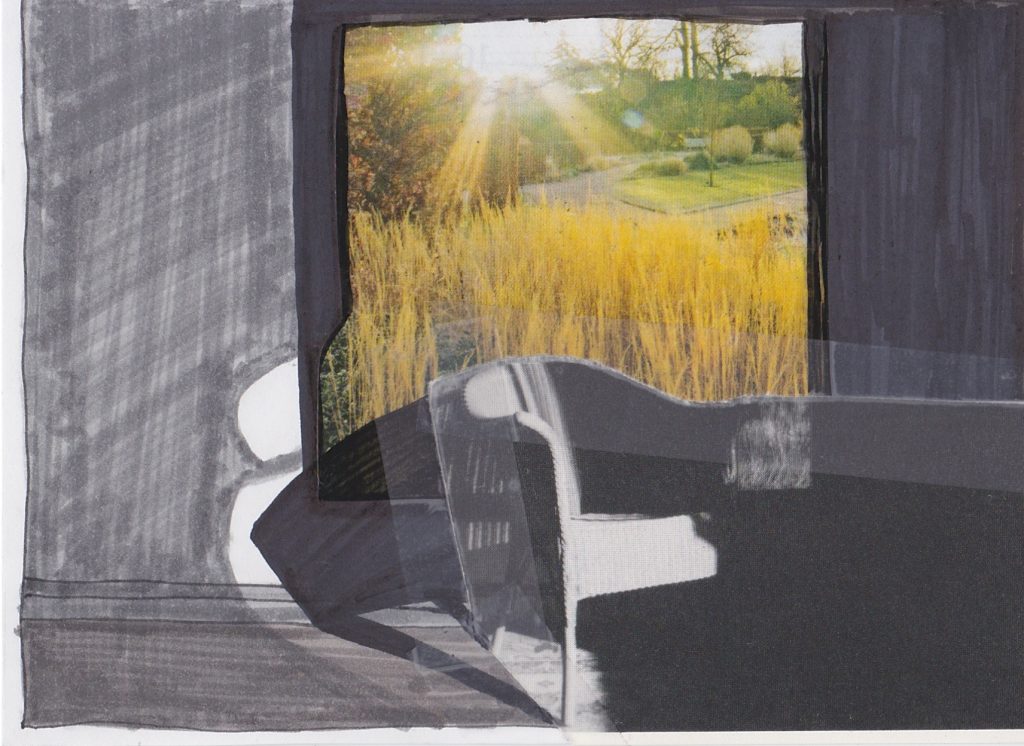 The new splash of colour had the effect of bringing the stuck-in-the-80s Athena image into the new millennium, but without ruining the atmosphere of the original.

This has been my most complicated piece so far, but I’m so pleased with the effect.